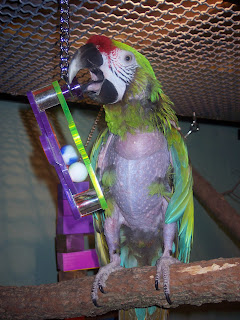 For much of the last twenty years, avian veterinarians have been occupied with developing diagnostic and therapeutic procedures for companion birds. Birds have often been presented in an emergency condition, and many of these birds died. In the late 70’s, the most conspicuous causes were related to importation (eg, infectious diseases, parasites, immunosuppression from overuse of antibiotics) or poor management associated with companion bird breeding facilities. Veterinarians were concerned about putting out these disease “fires,” so preventive medicine was not much of a consideration.

At the same time, however, Dr. Milton Scott of Cornell University was exploring avian diets. Dr. Scott conducted whole body analyses of birds, which showed that across the orders, all birds were made up of very similar components (especially ash and protein). He concluded that variation in actual intake of foodstuffs was primarily a result of food availability and adaptations for harvesting. Recommendations were made at that time regarding nutrient requirements of birds.

Today, twenty years later, many advances have occurred in the medical and surgical care of companion birds; therefore, one would think that enormous strides have also been made in pet bird nutrition. But relatively little scientific research has been conducted. According to experienced avian practitioners, malnutrition still underlies up to 90% of all clinical cases, yet veterinarians continue to recommend inappropriate diets for birds, including the feeding of enormous amounts of table food and the combining of various commercial products together (in effect, allowing the client to become his own “nutritionist”). Pet shops are also relatively ignorant about bird care and allow economics to dictate their sales of “bird food” (seed) to the public.

There will probably never be documented nutritional requirements for all the species of psittacine birds commonly kept as pets. But the knowledge is there for today’s avian professional to prevent malnutrition by offering to species under their care practical diets based on the considerable data available for Galliformes, Anseriformes and Passeriformes, and to evaluate and re-evaluate the clinical results obtained from feeding trials with various formulations. The variables that must be considered in applying the limited formulas that have been developed include: the species, age, sex, genetics, season of the year, housing, activity level, and whether the birds are laying eggs, raising young, molting, or recovering from surgery, disease or other major stress.

Many veterinarians with private bird clients and large collections of birds with malnutritional diseases often fail to realize the progress made by manufactured diets in recent years. It has become obvious from observing birds undergoing a diet change to a high quality formulation that a transformation occurs in the behavioral aspects of the bird as well as the physical and physiological condition.

According to the September, 1997 issue of Pet Age Magazine, the top four bird food companies in the United States base their sales mainly on seeds; therefore, most companion birds in this country are eating seed-based diets — just as they were in 1977. The difference is that today it is well known that seeds — no matter how they are colored, mixed or pressed into shapes — are not a complete and nourishing diet for pet birds. As early as 1923, scientists observed health deficiencies in caged parrots fed seed diets. Seeds (cereal grains such as sunflower, millet, oats, safflower, corn) are missing essential nutrients for bird health (Table 1).

Pet birds are reluctant to give up a seed diet for several reasons: 1) their parents were probably raised on seeds; 2) birds are extremely habitual creatures and do not want to change; 3) seeds are relatively high in fat content and thus taste good. On the other hand, if a bird had been raised on a formulated diet, it would not recognize seeds as food and would be reluctant to eat them.

As birds became more popular as pets in the early 1980s, improper feeding was identified as the chief cause of disease and death in pet birds. It was accepted by then that seeds had deficiencies of nutrients so the term “malnutrition” was considered synonymous with “deficiency.” The “cure” was perceived to be the addition of supplements to the seed diet.

The first supplements consisted of liquid vitamins applied to the drinking water, which was eventually discounted because of the dilution, pollution and rejection by the bird. Similarly, a cuttlebone attached to the side of the cage did not replace the missing calcium. Soon manufacturers of seed diets claimed to have various topical applications or secret processes of nutrients that penetrated the hulls of seeds to render the kernel “balanced” when consumed. None of these — including colored seeds, vitaminized seeds, fortified seeds, pressed and glued seeds — appeared to be effective because the clinical signs of malnutrition were still evident.

The next step was to supplement with fresh table foods — the wider the variety, the better — eventually evolving to recommendations of dark green, leafy and dark yellow vegetables and fruits because of their vitamin precursor content. Owner compliance was high because feeding their bird from the table was an excellent opportunity for bonding. Publications on “how to make your bird a table food connoisseur” implied that these steps would result in a balanced diet. What resulted were inconsistent feeding practices and basically allowing the bird to “choose” its own diet.

Manufactured diets specifically for birds were developed first from poultry nutritional requirements. The initial nutritional research performed on psittacines was done on cockatiels at the University of California at Davis, looking superficially at a sustainable diet, then more specifically at hand-raising formulas and levels of protein, lysine and total solids. Energy levels have been studied in research with budgies. The bulk of the data used to design food for today’s companion birds came from this background, starting with poultry and game bird foods and modifying them based on feeding trials.

It is evident that manufactured diets have the most potential for providing apparent nutritional needs to pet birds, but currently there are no published standards that would allow manufacturers to state that their foods are “complete and balanced.”

The earliest attempts to adapt companion birds to manufactured diets relied on available formulas for other species: trout chow, chicken starter, turkey chow, and eventually monkey chow because the primate diet contained vitamin D3 rather than D2. During the 1980s large numbers of psittacine species offspring were hand-fed using a monkey biscuit-based formula — sometimes with added baby cereal to dilute the D3 levels and peanut butter to increase the fat.

Today’s formulated diets were actually available in the form of pellets in 1977 but they were not very popular. The concept was valid but the process of pelletization did not really cook the food and caramelize the carbohydrates to increase the palatability. There was also some controversy over the effect of pelletization on nutrients such as fatty acids. More importantly, the poultry formulations were too high in salt, vitamins A and D3 and protein resulting in serious disorders in parrots.

Formulated diets increased in popularity in the late 1980s because of a process called extrusion. With extrusion, ingredients are forced through a valve under high pressure and heat, resulting in a product with uniform appearance, increased palatability from caramelized carbohydrates and incorporated air, increased digestibility, and increased shelf life due to altered enzymes.

A number of well developed, high quality formulated diets are available today based on direct feeding trials with various companion bird species. Some are more readily accepted than others. Birds are able to taste, which is supported by the presence of taste receptors. Preference testing experiments have shown responses to sweet, bitter, acid and salt solutions. Sugar or fat can be added to a diet to facilitate its acceptance; however, the continued use of 10% sugar and 15% fat by weight in a formulated diet has been shown by this author to be detrimental.

Subtle shades of black, brown, yellow and green (naturally occurring colors of food) have been shown to be most acceptable by birds. The use of dyed foods has been found to decrease the acceptance of food by the bird in several studies, although the owner may find these attractive.

The Fallacy of Balancing a Diet at Home

Recent work at the Animal Medical Center in New York verifies that adding table foods or formulated diets to seeds does not balance a bird’s diet; formulated diets must be fed over 75% of the total intake to be effective. There are too many variables on the part of what the owner offers and what the bird selects. Balancing the seed portion with an extruded or pelleted portion is also impossible to manage.

Documented cases of hypervitaminosis A and D3 are well known in pet bird literature. Yet to maintain the level of nutrients consist with package labels to survive the production process and to prolong shelf life, some manufacturers double or triple the initial amount of potentially toxic component. Heat- and moisture-sensitive ingredients such as vitamins, vitamin precursors and pigments (eg, beta carotene) should be applied after the extrusion or pelletizing process, in this author’s opinion.

One of the most important aspects of preventive avian care is nutrition. Many veterinarians do not realize that malnutrition is the underlying cause of most of the clinical signs of disease they see on a daily basis. The clinician should maximize his ability to detect the early signs of malnutrition because these are also the early signs of illness. The chronic signs of malnutrition (feather picking, sore feet, dry, flaky skin, liver disease, obesity, listlessness, lack of singing, talking and playing, chewing up cage, biting people, self-mutilation, etc.) could actually be considered signs of cruelty. Especially when there are high quality formulated diets that have proven to relieve these often painful clinical signs with no other form of therapy.

Malnutrition can be the primary etiology that produces obesity, generalized deficiency syndrome, hyperkeratosis, metaplasia resulting in poor feathering and skin quality, fatty liver degeneration, hypocalcemia, gout, mineralization of kidneys, and other organ failure from dietary excesses. More often, though, malnutrition creates an immunosuppressed bird that expresses this condition as feather picking, persistent molting, cloacal prolapse, egg binding, chronic egg laying, foreign body consumption, behavioral problems, and susceptibility to bacterial, yeast, viral and parasitic infections. These are the most common clinical presentations seen in a psittacine practice and correction of these disorders becomes a major part of the clinical criteria for evaluating the nutritional status of avian patients.