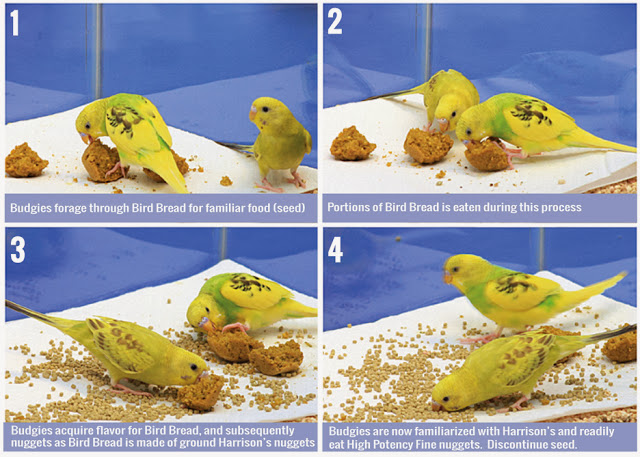 The following is an example of a safe and effective method of converting the diets of small birds.

A very stubborn pair of budgies who were solely on spray millet were brought to us for a conversion trial. (Budgies are shown in this trial - but other small species including cockatiel, canary, lovebird etc. all convert similarly)

The pair was always ravenous for spray millet but turned up their beaks to anything else we offered.

At that point we baked up a batch of Harrison's Bird Bread Mix in small muffin shapes with spray millet mixed into the bread. The bread was broken up into pieces and placed on top of a clean paper towel at the bottom of the cage.

As expected, for the first few days the pair sorted through the muffins for the millet. On day three though we observed that they were also now eating bits of the Bird Bread. The amount of millet mixed into the bread was reduced and eventually replaced with High Potency Fine. After a few more days the millet was completely removed and High Potency Fine was scattered amongst the pieces of Bird Bread on top of the white paper towel.

Within a few days not only were they off spray millet completely - they were now eating only Bird Bread and HPF. Though continuing Bird Bread as a treat is optional, after another batch-worth of Bird Bread was exhausted we continued with only HPF and the birds are doing excellent!

Some birds are hesitant to change diets to a healthy formula.
Jump start the process by replacing your bird's previous seeds with JUMPSTART GREY MILLET for 3 - 5 weeks.
JUMPSTART OMEGA (a nutritious source of omega fats) may be fed during this period at 10% of the over diet until full conversion is accomplished.

Some smaller birds will transition from seeds to Harrison's using our Juvenile Hand-feeding Formula (or crushed Harrison's nuggets).

Juvenile is a powdered food that can be offered dry or mixed to a gruel consistency using warm drinking water. Make a small batch and mix in some of the seed your bird currently eats as well as a small amount of High Potency Fine ( or Super Fine )

Small birds will sort through the powder mixture (or gruel) for seeds. Ultimately they will start picking out pieces of the Harrison's as well as bites of Juvenile Formula. Note progress. Weigh birds daily.

Allow birds as much time as they need to switch. Offer as much of the food as they will eat. Once you are confident your bird is switched taper down the amount of seeds as well as Juvenile Formula.

Diet Conversion is a Challenge not to be taken Lightly.

It is imperative to immediately return a bird to its original diet if it refuses to eat the new diet.Small birds have a rapid metabolism and can starve to death in as little as 36-48 hours if they do not get enough food to eat. Owners should consult with an avian veterinarian and set up a conversion program that works but does not harm the bird in the process.

Modifying a bird's diet is one of the biggest behavioral challenges an owner will undertake. Most issues can be overcome with patience and perseverance. Educating the owner about the benefits of feeding a formulated diet versus a seed-based diet is the first challenge.

Any dietary changes should be undertaken gradually. An important concern is the bird's refusal to eat a "new" food, leading to significant weight loss. Weighing the bird (in grams) on a daily basis using a gram scale is the best method for monitoring adequate food consumption. Weight fluctuations greater than 10% are considered problematic. Even if provided with supplemental food, birds can starve to death while merely appearing to chew their food but not consuming it. Grinding the food into a fine powder is not the same as eating the food.

Monitoring droppings is an excellent indication of the amount of food the bird is eating. Prior to the diet change, the number and character of the droppings (color, amount, liquid, form, shape, lack of odor, staining) should be noted. Any change in the volume or number of droppings (usually a dramatic decrease in amount) indicates insufficient food consumption.

Owners should not be confused by the appearance of wet droppings, which they may assume to be normal. Wet droppings usually have little fecal matter produced from food consumption. Wet droppings are often a sign of weight loss as fat and muscle are converted to energy and water. The character of the droppings will change as the bird consumes more formulated diet - they usually become more firm with a definite shape.