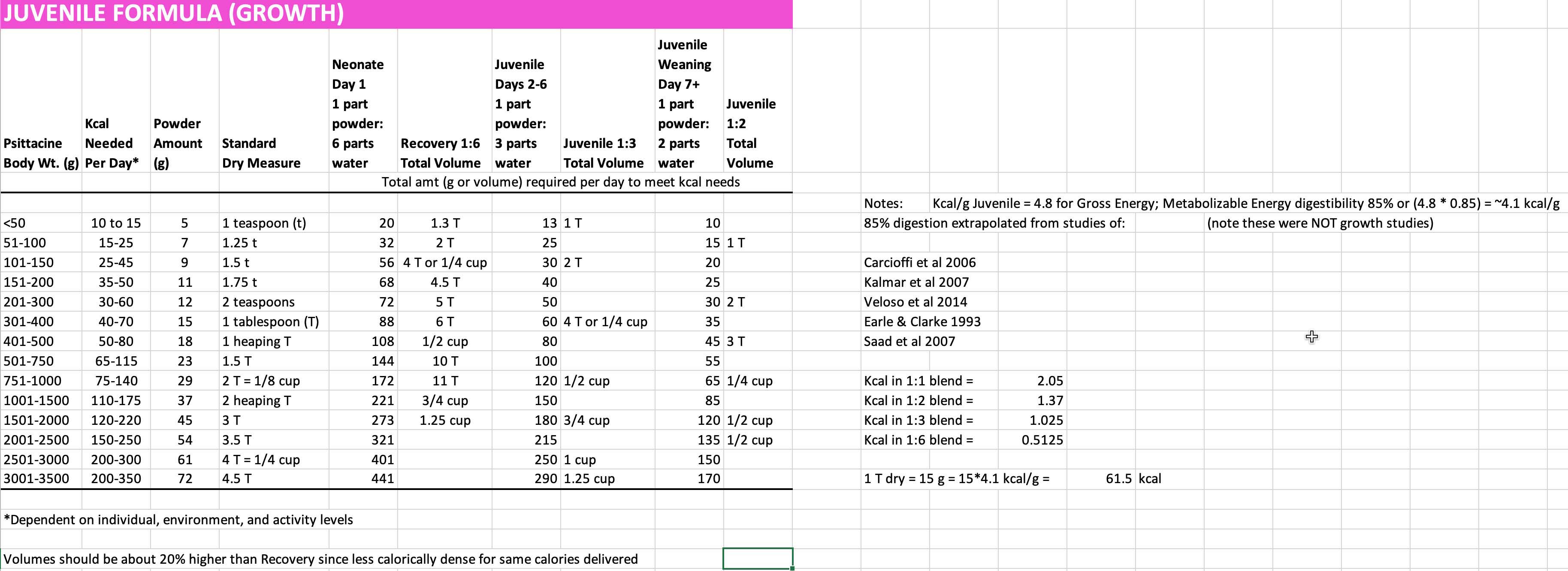 Hand-feeding a psittacine chick is rewarding, but it does involve a major time commitment and some training. The current trend is for the breeder to hand-feed until the baby is fully weaned or at least requires less than two feedings per day.

Setting Up the Nursery
The nursery can be established in any temperature-controlled room that is separated from family activity. It must be free of cigarette smoke, cooking fumes, hair spray and other aerosols.

Proper Temperature and Humidity
The nursery must be kept warm until the bird grows enough feathers to regulate its own body temperature. The temperature should be 94°F for featherless birds, and gradually decreased to normal room temperature as full feathering occurs. The humidity for tropical species should be in excess of 50%.

Making a “Nest”
In the first few weeks of life, the chick is best housed in a dark, quiet environment that mimics a nest. An individual container with safe bedding material such as paper towels is preferred. In time, a plastic-covered wire mesh underfoot may be used to support the legs as the bird begins to stand. As it develops curiosity about the family’s activities, the chick can be moved to a transparent enclosure. Housing clutchmates together at this age encourages socialization. Fully feathered chicks are capable of flight and should be kept in secure enclosures.

What to Expect From Your Chick
Young birds may be uncoordinated and splay their legs when trying to walk. Until weaning, they sit on their hock joints, rather than up on their feet. Nestlings have relatively little muscle mass and a large, protuberant abdomen. As the bird ages, the muscle mass will increase. Normal nestlings have yellowish-pink skin with a supple, warm feel. The first feathers appear on the head, wings and tail, followed by feather emergence on the rest of the body.

The Crop
The crop is a sac-like enlargement of the esophagus where food is held after swallowing before it moves down the gastrointestinal tract. Right beside the esophagus is the trachea, which leads to the lungs.

Normal Feeding Response
Hungry nestling birds display a feeding response that consists of rapid, thrusting head movements and bobbing up and down. These movements can be stimulated by touching the sides of the beak or pressing lightly under the jaw. While the bird is displaying this behavior, the glottis is closed and large amounts of food can be delivered quickly with less fear of passing food into the trachea.

The Daily Schedule
Chicks with their eyes opened should be fed 3 to 4 times daily, and birds with feathers emerging, 2 to 3 times daily. The crop should be filled to a “plump” capacity at each feeding (not overstuffed) and allowed to empty before the next feeding.

Feeding with a Syringe
Feeding with an irrigation syringe is probably the most universally successful technique. As one faces the bird, position the syringe to enter the oral cavity from the left side of the bird’s beak and direct it toward the right side of the bird’s neck. Deposit the food into the bird’s mouth and, as it swallows, the normal feeding response closes off the trachea and prevents aspiration of the formula into the lungs. Taking the extra few minutes to allow actual “tasting” of the food with this method pays off with an accelerated weaning time.
Caution: A bird may inhale a small amount of formula if it is tired, if the feeder is inexperienced or takes too long to feed, or if the formula contains too much fluid.

Step 1
Gently feel the crop to determine that it is empty before feeding.

Step 2
• Mix fresh formula. Heat to approximately 103°F (check temperature).
• Fill a clean syringe and remove any excess air.
• Deliver formula into the back of the bird’s mouth with gentle, steady pressure on the syringe plunger.

Step 3
• Feed the chick until the crop is full butnot overstuffed.
• Clean excess formula from the chick’s beak, feathers and enclosure.

HEALTHY HAND-FEEDING CHECKLIST
• Ask the aviculturists about their preventive care program, including vaccinations and disease testing.
• Present chick for preliminary examination by a veterinarian.
• Early development: provide a dark, quiet environment that mimics a nest.
• Later development: house in transparent container to expose to family activity.
• Separate babies from different clutches.
• House babies away from household fumes (bleach, cigarette smoke, hair spray, perfumes, cleaning fluids, pesticides).
• Monitor environment for temperature and humidity.
• Use a high quality hand-feeding diet formulated for parrots.
• Make formula fresh at each feeding.
• Do not feed milk to baby birds.
• Test formula water to make sure it is pure and uncontaminated.
• Use a sterile feeding tube or syringe for each bird and clean thoroughly after each use.
• Feel the crop before each feeding to see if residual formula remains.
• Make note of feeding response and skin tone at each feeding.
• Weigh chick daily and compare to published normal weights.
• Check the color, consistency and volume of feces.
• Do not allow feces or hand-feeding formula to accumulate on the bird or enclosure.
• Change bedding at each feeding or when soiled.
• Contact an avian professional with questions or concerns.