Here at Harrison’s we love all the success stories we get from our clients (and their owners). Today’s post is a very special story about Buzzy the cockatiel, submitted by his owner Jennifer B. from Romulus Michigan.
It’s not uncommon for stressed seed eaters to turn it around quickly once switched to Harrison’s. (for quick “Bird Bread conversion” please visit http://www.harrisonsbirdfoods.com/budgies.html )
(Photo, courtesy Jennifer B. – Buzzy, before and after) 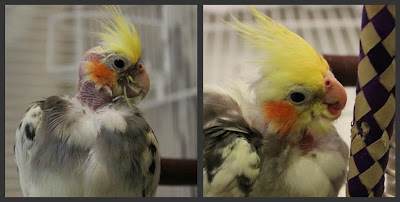 Here’s what Jennifer had to say…
“Just wanted to share the story of my bird! I adopted Buzzy, a rescued cockatiel, just under a year ago. He’d been kept in overcrowded conditions, and the other birds plucked him relentlessly.
I was told that his feathers probably wouldn’t come back. He’d also been living on an all-seed diet, and it turned out that he had a chronic respiratory infection (which took several trips to the vet and several courses of antibiotics to clear up). I took the photo on the left in April, when he was finally mostly healthy and ready to start a diet conversion. It took a couple months, but by the end of June, he was eating Harrison’s mash as his main food (I mixed Lifetime and HP, because I couldn’t get him to eat the HP on its own. Now he’s on Lifetime only). He also gets a small piece of Harrison’s Bird Bread (made with Sunshine Factor, as recommended by his vet) every day, along with a small amount of veggies and millet for variety.

Since the diet change, he’s grown in lots of new feathers! The pic on the right was just taken a month ago. His neck is still pretty bald, but look at his face! Even better — he seems happy and his blood values are almost normal now. I firmly believe the Harrison’s products have a lot to do with his improvement… so, thank you! 🙂

Buzzy had been a little underweight at 73 grams when I first adopted him, but since the recovery from his illness and the diet change, he’s been steady at 78 grams (which is about right for his size). At his last physical exam, the vet commented on how well-muscled Buzzy is now. Buzzy’s also been singing a lot more, and has been more active in general. He looks forward to his snuggle time every evening, when he gets his Harrison’s Bird Bread. I’m not sure if he’s mostly interested in the snuggles or the bread, though, lol. One more brand new thing – he’s had a bald spot on his right wing, where the long primary feathers are supposed to be, so he hasn’t been able to fly. Well, when I was giving him his shower this morning, I noticed a new feather starting to come in.

Not much is known about his past though, beyond the overcrowded conditions he’d been in. I’m not even sure how old he is (he had X-rays done when he was sick, and the vet said it looked like he might be an older bird, but beyond that, no clue).”

An extra special thanks to Jennifer B. and Buzzy for taking the time out of her day to share their story!

Happy Holidays to all of our feathered friends (and their owners)! – The Harrison’s Team