Special thanks to Danita in Vancouver for filling us in on the progess of her very special African Grey Bea.

How old is Bea?
Bea is roughly 23 years old.

How long ago did you acquire her?
I have had Bea for about 1 and one half years. I found a picture of her on the internet, posted by someone who wanted to rehome her. I was heartbroken just looking at it. The exchange of money for Bea took place at a Dairy Queen restaurant at the side of a highway. She was in a little carrier, holding so tight to her three eggs, and protecting them with all she had in her.

What was her previous diet/health condition at that time?
According to Bea’s vet, she was extremely debilitated, emotionally and physically. She was so weak, she had difficulty perching, and she was an excessive egg layer. The first week here, she ate and ate., She could not get enough food. Bea was also treated with medications for several infections. Her previous diet consisted of seeds and cat food.

How is she doing now?
She is laying infertile eggs twice a year. She is so strong and healthy. I attribute her strength, feather condition and overall good health to her diet of Harrison’s mash. She looks forward to it twice a day. Bea also enjoys fresh foods. In the time that Bea has been here, she has become the senior flock member (we have another grey and a macaw). They both know that Bea means business when they come near her.

Bea is very affectionate with our family. She enjoys cuddling and lots of interaction. There is something in her eyes that is hard to describe, when she looks at me I melt every time. Bea is one of those pets that you bond with so tightly, and that only comes to you once in a lifetime. I am so thankful I was able to give her a forever home where she will always be treasured and cared for.

“She was a Peanut/Cat food/ and Seed girl when I got her.
I wanted her to eat Harrisons, so I started with mostly warm mashed banana, then added the mash slowly. Eventually it increased to all mash and no banana. My three large birds eat this 1-2 times a day.

I click the spoon on the dish, I created a conditioned response, stimulating her appetite. I wanted her to eat as much as she could. I have done that since Day 1 Now when she turns her nose up to food, I click the bowl and she eats. Now whenever she eats, she wants the click sound.” 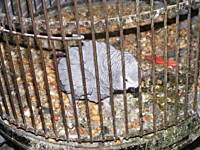 (Bea – prior to being adopted by Danita)